There's a commonly known business model, first developed back in the 1960's, which describes the process that a team goes through to become effective -  storming norming performing et al has been evolved to include a few extra rhyming words but essentially talks about the teething problems, ''getting to know you' stage, boundary setting, and (hopefully) fully formed and healthy state a team can get into.

There's been some jokes around my house recently that the same model could be applied to personal relationships.   I'm not quite sure which bit I'm sitting in at the moment - in fact I'd argue that its a fairly fluid model (much like the grief process, it can be two steps forward and one back some times!), but when I found myself using the ''royal we'' a few days ago it did highlight to me that maybe there's less forming and storming going on and maybe a gentle incline (sounds better than decline!) into norming and performing.

I've read loads of stuff about the process of re partnering.  I'm the first to admit that the are a lot of potential challenges, and its as much about the rest of each persons team as it is about themselves - kids, extended family, friends, work, interests - there's a heck of a lot to negotiate and learn about.  For me, so far so good - or should I say, for us, and whilst the forming and storming is a lot of fun, I'm also looking forward to settling into the new way of normal that I have talked about here before.

Interestingly on the link above there's two extra stages - Dorming and Adjourning.  My guess is that this is probably more relevant to a time bound project, but it certainly highlights the need to remain focused on the well being of the ''team'' in order to avoid complacency (surely one of the death knolls for any relationship) and also to remain vigilant to the potential challenges and pitfalls that can trip up even the most committed of partners.

If you're in a new relationship, or even one that's not so new, where do you think you might fit on this continuum? 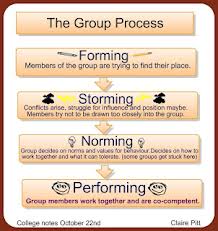